The geological genesis of Cyprus took place through a series of tectonic episodes.  Geologically, the island of Cyprus is divided into four geological Terranes: (a) the Keryneia Terrane (b) the Troodos Terrane (or Troodos Ophiolite complex) (c) the Mamonia Terrane and (d) the Circum Troodos Sedimentary Succession (Fig 3). 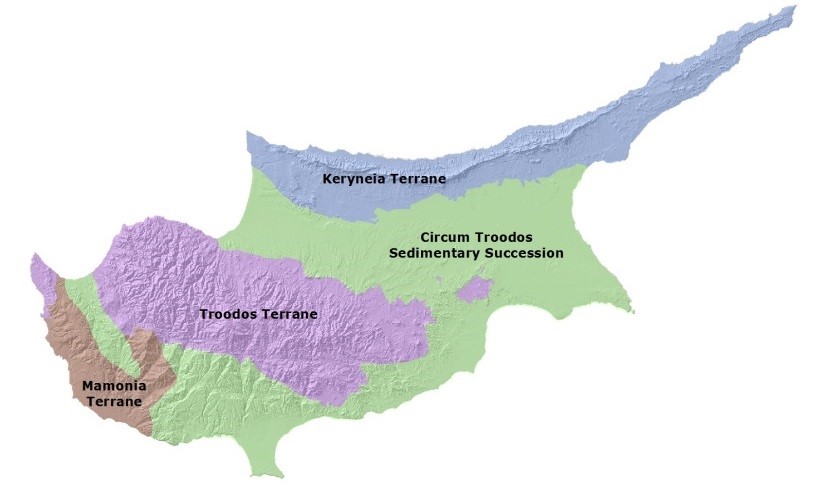 The Cypriot CLIMA case study Nea Pafos lies in the Mamonia Terrane. The Mamonia Zone or Complex constitutes a diverse and structurally complex assemblage of igneous, sedimentary and metamorphic rocks, ranging in age from Middle Triassic to Upper Cretaceous (230-75 Ma). These rocks, which are regarded as allochthonous in relation to the overlying autochthonous carbonate successions and the Troodos ophiolite rocks, were placed over and adjacent the Troodos ophiolite during the Maaistrichtian. They occur only on the southern part of Cyprus with extensive outcrops in the Pafos region. The stratigraphic classification of the Mamonia Complex poses problems, however three main groups can be recognized.

The high degree of deformation and alteration in combination with the clays and steep topography is considered some of the factors for instability in the Pafos region. In addition, earthquakes phenomena have always had a very significant role in the region.

NOTE: Information of this paragraph has been retrieved through the website of Geological Survey Department of the Republic of Cyprus [1]