During the last decades, an expansion of the urban sprawl has been recorded in the broader area of Paphos District. Extensive construction and building development has taken place, and several areas of archaeological interest currently suffer the effects of widespread urban growth. Ancient necropolises located in the centre of modern Paphos area were among the archaeological sites that suffered the most from the building boom during the 1980s. Unfortunately, the same pattern is repeated today, though in more restrained form, in the periphery of Paphos centre. A representative example is the case of the ancient necropolis at the site Meletis of Peyia village, in the north area of Paphos, where recent construction activity has literally smothered the archaeological site. The newly constructed buildings are in close proximity to the archaeological site and their height exceeds the low hill into which the rock-cut tombs are shaped. Similar case is the Hellenistic–Roman necropolis in the village Anavargos, approximately 3 km northeast of Nea Paphos. The construction of buildings and roads and their use by heavy traffic can be destructive for the adjacent monuments that suffer from continuous vibrations.

In 2015, Agapiou et al. [7] have illustrated the use of Earth Observation techniques for quantification of the urban expansion in the vicinity of cultural heritage sites. Fig. 1 illustrates the urban expansion of the Paphos town during the period of 30 years, as recorded using satellite imagery and RS techniques. Here each color represents a different year of observation: black color indicates urban areas in 1984; orange refers to the urban areas in 1990; red color refers to the urban areas in 2000 and green indicates the urban areas in 2010. This comparison illustrates a dramatic expansion that took place in Paphos district, especially during the period 1990–2010. New urban areas were developed in the surroundings of the existing town, while at the same period an extensive urbanization was observed in the northwest area (Peyeia region).

Further, a classification performed was exploited in order to evaluate the urban expansion in the vicinity of the Cultural Heritage sites of Paphos. A buffer zone of 500 m was set to each site, while the area of the different land use classes use classes was calculated. The results indicate that urban land coverage in the vicinity of cultural heritage sites has increased during the period 1984–2010 (Fig 2, above). A more detail observation of the results shows that urban development has expanded up to 350% during the last 35 years. Indeed, as it was found from the low 4% of the total land covering 1984, urban areas were increased to 7% in 1990, 11% in 2000and 14% in 2010. For the period from 1984 to 2010, approximately 15% of vegetation and soil land cover have been turned into new built up areas. These land use changes correspond to approximately 51km2 and 9km2 for bare soil and vegetation coverage respectively. Such changes exercise significant pressure to cultural heritage of Paphos, resulting in an increasing trend of rescue excavations performed by the Department of Antiquities (Fig. 2, below). 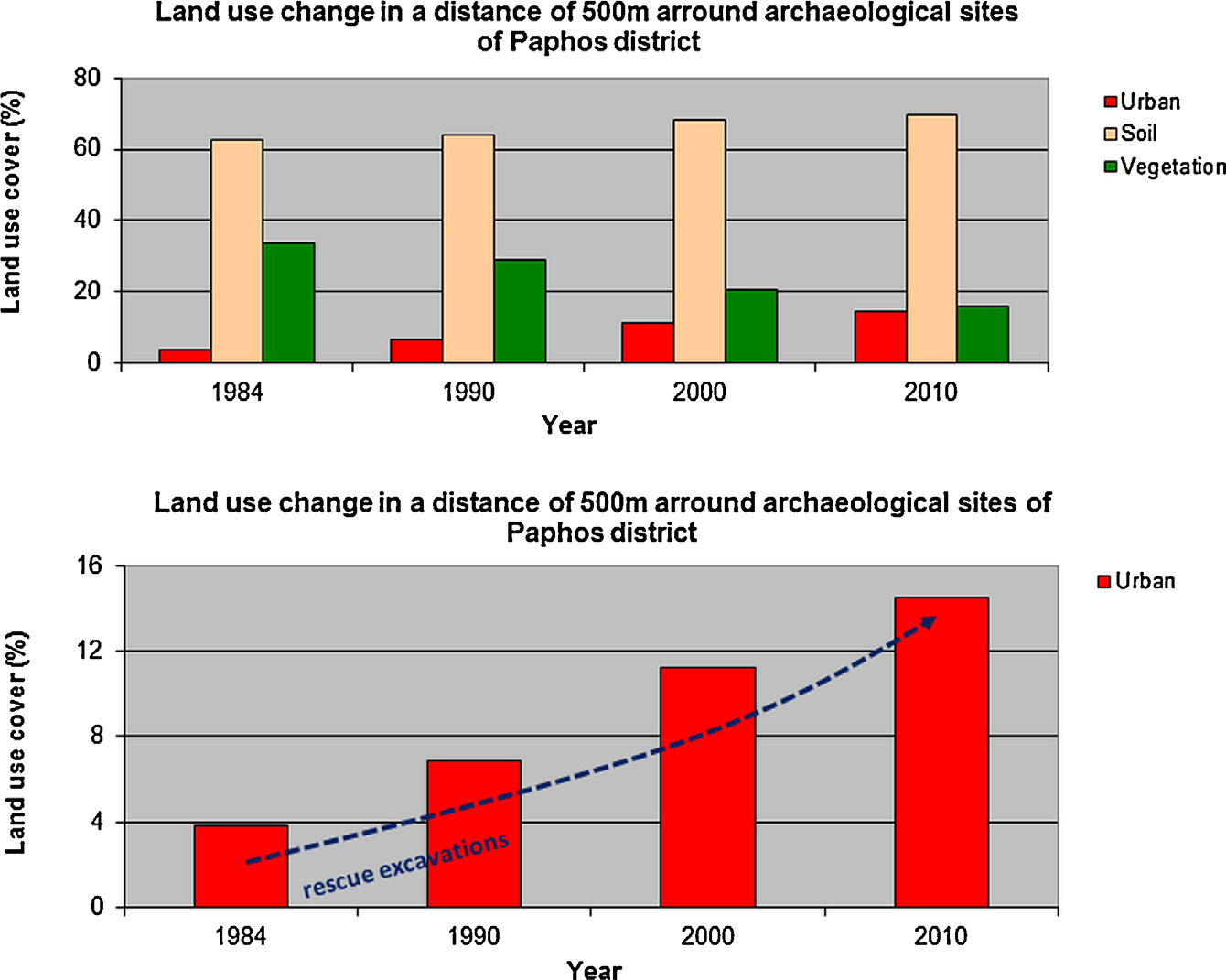 In case of Nea Pafos, the situation is slightly different because this site has been protected prior to the “building boom” of the ‘80s has occurred. In fact, Tombs of the Kings and Nea Pafos sites have been declared as World Cultural Heritage sites in 1980. These sites have since been protected and therefore they were not subjected to the effects of the sudden urban sprawl.